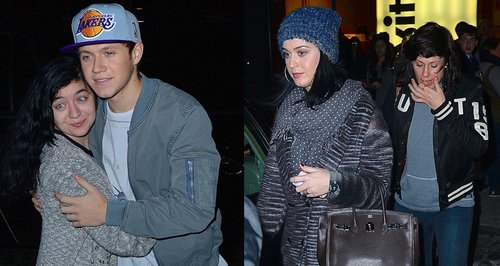 The 'Unconditionally' singer and boy band star Niall ate out with friends in the Big Apple this week.

Katy Perry and One Direction star Niall Horan cemented their friendship this week after dining out together in New York City.

The 'Roar' singer and boy band star Niall were spotted enjoying a meal with friends out in the Big Apple at members-only club Soho House on Wednesday evening (4th December).

The pair arrived and left the venue separately, with Niall greeting some of the many One Direction fans gathered outside, and are well known to be friends after joking that they had gotten engaged earlier this year.

View a picture of Katy and Niall on their respective arrivals below (Credit: Splash):

Katy opted to wrap up for the occasion in a striped brown coat and leather boots, along with a beanie to keep away the cold, while Niall went casual in a grey jacket, white t-shirt and jeans.

Katy Perry is set to head back to the UK soon ready to perform live on Saturday 7th December at the Capital FM Jingle Bell Ball 2013.

One Direction are out in New York ready for their musical guest spot on Saturday Night live this weekend.