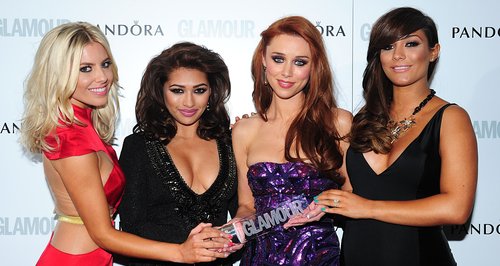 The likes of Rita Ora and Victoria Beckham also walked away with gong at the high fashion event.

Jessie J and The Saturdays were among the artists to win gongs at last night's (4th June) Glamour Woman Of The Year Awards 2013 in London.

The 'Domino' singer was presented with the Editor's Special Award at Tuesday's ceremony at Berkeley Square Gardens, and attended the event in person dressed in a royal blue top and matching trousers.

The Saturdays were also in attendance at the Glamour Awards to pick up a gong for Best Band, their second time winning the award, while 'What About Us' Mollie King was celebrating her birthday as well.

"A HUGE thank you to @GlamourMagUK, I can’t believe we’ve won Best Band for the 2nd time!" Mollie tweeted after the event. "Just incredible! And the perfect birthday pressie!"

Rita Ora was also at this year's Glamour Awards showcase and was presented with an award for Best Solo Artist by her best friend and so-called 'wifey' Cara Delevingne.

Check out a picture of Jessie J at the Glamour Awards 2013 with her gong below (Credit: PA):

The 'R.I.P.' singer showed up in a silvery long gown for the ceremony, which was a who's who of British music and fashion stars.

Other winners on the night include Victoria Beckham for Woman Of The Decade, Miranda Hart for Best Writer and Rebel Wilson for Best Film Actress.