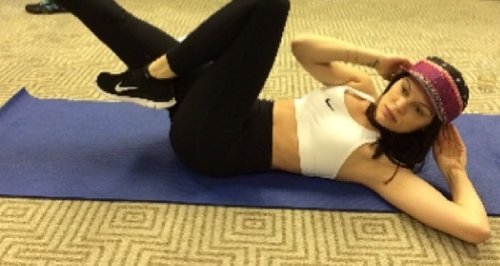 The 'Wild' singer is seen performing several exercises as part of her new regime.

Jessie J has showed off her fitness skills, and her abs, in a series of new snaps and videos of her in the gym.

The 'Domino' star shared several new pictures online this week after landing back in Los Angeles to work on the US edition of her album 'Alive'.

Jessie is seen performing squats, bicycle crunches and mat work in the various snaps, as well as posting a video of her using a leg machine in the gym while dancing along to the music.

View a snap of Jessie during her workout below (Credit: Instagram):

"This pose always makes me laugh. #squats #la #2014training," Jessie tweeted alongside one of the pictures.

Jessie J is back in the US to perform a handful of shows stateside, as well as working on some new music for her US album.