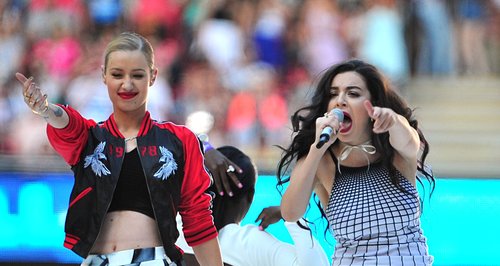 80,000 people were 'Getting Iggy With It' as Iggy Azalea stormed the Summertime Ball with 'Fancy'.

Iggy Azalea got one of the loudest screams from the crowd before she even entered the stadium - the 'Fancy' star was one of the crowd's favourites for the Summertime Ball. It's ALL about Miss 'I-G-G-Y'!

Performing as one of our Breaker acts, Iggy stormed the stage with her incredible performance of 'Fancy', and had her loyal fans bouncing around Wembley as she brought out her special guest Charlie XCX - NICE surprise! We love a two-for-one deal after all!

Performing in a cropped top, bomber jacket and shorts that showed off those legs that go on for MILES, Iggy rocked a slicked down ponytail as she rocked 80,000 people.

She's definitely one of our top girl crushes for 2014 - we can't WAIT to see what else she will bring!

Iggy tweeted ahead of the show:

on my way to wembley @CapitalOfficial

Iggy's fans were hyped for her performance: