It’s caused the most speculation around the X Factor this year, but Ella Henderson is a BIG supporter of Tulisa’s return

Tulisa was Ella Henderson’s mentor during her time on the X Factor in 2012, and the little lady with the biggest voice has only great things to say about her possible return to the X Factor.

The rumours are rife that Tulisa could be heading back to the X Factor to be Louis Walsh’s guest at judge’s houses in this year’s show.

When Max quizzed Ella about the prospect of Tulisa returning she said, “Yeah, I’ve heard that! I think it will be good! Her and Louis are so funny together so it will be good if he did bring her back on it for that bit.”

While Tulisa isn’t on the panel for this series, Ella told us that having her as a mentor for her time on the show was a Godsend.

“Going through that, I was 16, it was terrifying and it was so humbling to just go into someone’s dressing room and let your heart out, then all of a sudden just go on stage and then you come back out and she’ll be like ‘See, it went fine!’ and it would all be cool. She made me feel very chilled about everything and that’s exactly what I needed because I was a bag of nerves on the show.”

She may have been nervous during her time on the sow but Ella is turning into quite the seasoned performer these days – the HUGE number one she scored with her first single ‘Ghost’ can’t have hurt, either!

We couldn’t let her go without finding out all the goss about her next single, ‘Glow’ and what we could expect from the music video.

Ella told Capital, “This song represents unity, it’s about bringing people together. When we shot the music video we wanted to keep it really free and there was no story to it, it was just kind of casting a load of young, fun, cool people through the night, a lot of field action!”

“It was great fun and I just want to share a song with people where they feel like they can sing along to it.”

Listen to the full interview with Ella on Max’s show from 10pm on Tuesday 12th August.

> We've got EVERYTHING you need to know about Ella's debut album, 'Chapter One' 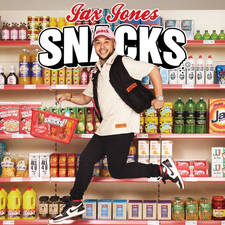 This Is Real
Jax Jones & Ella Henderson
Download on iTunes