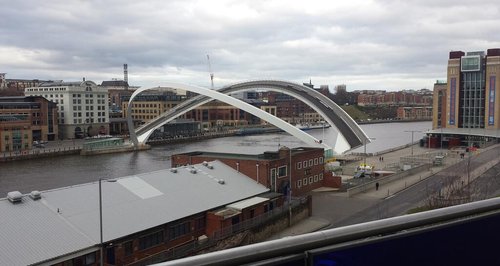 The famous tilting Millennium Bridge over the Tyne in Newcastle and Gateshead has jammed open after developing an electrical fault.

The £22m bridge, dubbed the Blinking Eye, broke down at lunchtime.

It was believed to be the first time the mechanism has failed since it opened in 2001.

The bridge, for pedestrians and cyclists, uses electrical power to tilt open to allow vessels to pass underneath.

Engineers are currently on site trying to correct it.''

It was fixed and working again by 6:15pm - and even lit up in green to celebrate St Patrick's Day.