#UnionVamps! Union J Announce Re-Release Of ‘You Got It All’ Featuring The Vamps 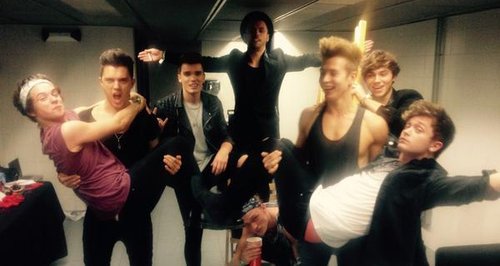 Union J revealed that not only are they joining The Vamps on tour next year, but the two bands have teamed up for the re-release of ‘You Got It All’.

Two of the UK’s fittest boybands teaming up to make a supergroup? Yep, hot on the heels of McBusted comes… #UnionVamps!

Union J have just announced that as well as joining The Vamps on tour next year, The Vamps will be featuring on a re-release of Union J’s new song ‘You Got It All’.

Union J announced the news on Twitter this morning:

Did you think Stereo Kicks were the only 8 piece boyband? #UnionVamps version of You Got It All PRE ORDER NOW! http://t.co/vsSKl31nAs -Jaymi

And its been a VERY exciting day all round for Union J and The Vamps as they were both announced as performers for Capital’s Jingle Bell Ball 2014 with Morrisons, and will be rocking London’s O2 Arena on Saturday 6th December!

VIP presale tickets for Saturday sold out in record time, but you can still get your hands on tickets when they go on general sale on Friday – but you’d best be quick!

The reworked song is available to pre-order on iTunes now, click here to get yours!