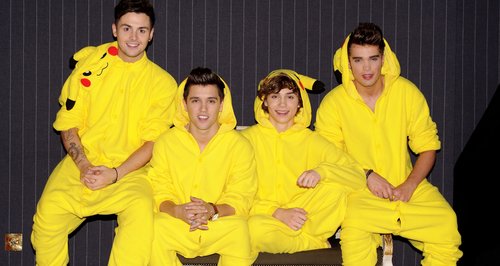 The 'Carry You' four-piece dressed up as Pokemon mascot Pikachu to announce news of their name change.

Union J have announced plans to change their name for one day only to tie in with the launch of the new Pokemon video games for Nintendo 3DS.

The 'Carry You' four-piece will rename for one day only next Saturday (12th October), the day that Pokemon X and Pokemon Y launch globally in stores, to help promote the new games and show their love for the franchise.

"We're changing our name to Union X & Y! It's so cool!" George Shelley announced at a press conference for the event today, while Jaymi Hensley explained: "Next Saturday we're going to change [our name] on our Twitter to Union XY, George came up with this, it was amazing, as we wanted to make it Twitter.

"We've completely collaborated with doing the logo and everything," George explained

"We've always loved Pokemon and it was a massive part of my childhood, I'm hooked on it," George explained. "When I was telling the rest of the band how excited I was about playing Pokemon X and Pokemon Y, the idea to change our name just came to me.

"It's cool to be part of the game in some way, it feels like a natural fit," he added.

Union J will rename themselves Union XY next Saturday (12th October), the day of the worldwide launch of Pokemon X and Pokemon Y.

The band will also release new single 'Beautiful Life' on 21st October with their debut album following on 28th October.