The 'Carry You' stars also name the 'Candy' singer as one of their dream future duets.

Union J says they can't wait to watch all the stars perform at the Capital FM Summertime Ball 2013 later today (9th June), and singled out acts like Robbie Williams and Lawson as soon of their most anticipated.

The 'Carry You' four-piece will make their Summertime Ball debut at Wembley Stadium today, and have been praising some of the other big name acts they are sharing the bill with.

"Robbie Williams is going to be amazing," JJ Hamblett told Capital FM presenter Marvin Humes ahead of the show, while Josh Cuthbert said: "I think will.i.am.

"Lawson are looking wicked as well," Josh explained. "I can't wait to see everyone, they're all so amazing. Honestly, to be on the same list as them!"

The X Factor UK stars also revealed who they would love to duet with in the future, with Jaymi Hensley saying Jason Derulo and JJ naming one of his fellow Summertime Ball stars. 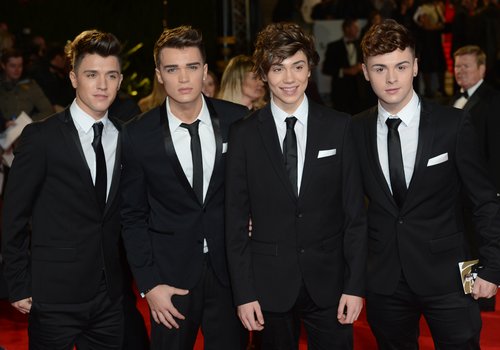 "I still think Robbie Williams, I do," JJ revealed. "Because he's been in a band and he's a solo artist.

The Capital FM Summertime Ball 2013 kicks off today with performances also expected from Taylor Swift, The Wanted, The Saturdays and Olly Murs.

Watch Capital FM presenter Marvin talking to the Union J boys ahead of their performance below:

On Capitalfm.com, we're bringing you all the latest news, gossip, pictures, videos and performances from the event, and stay tuned to ourlive blog  for the best backstage action.

On Twitter, keep it @CapitalOfficial  using the hashtag #CapitalSTB and download the Capital App  to watch all the live performances.