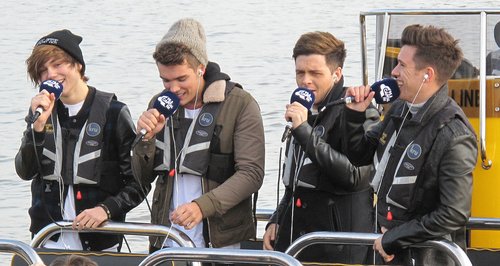 The boys headed along the waters in London as they announced their appearance at this year's huge event.

Union J have been confirmed as the next act to join the line-up for Capital FM's Jingle Bell Ball 2013.

The big reveal took place on the River Thames during a high-speed boat ride with Capital's Max.

JJ, Jaymi, George and Josh will make their debut appearance at the event when they take to the stage at London's O2 Arena on Saturday 7th December.

Watch Union J revealing their Capital Jingle Bell Ball 2013 appearance during a speed boat ride down the Thames below:

The boys will shortly be heading out on their debut headline tour next month and recently released their debut album – which features the singles 'Carry You' and 'Beautiful Life'.