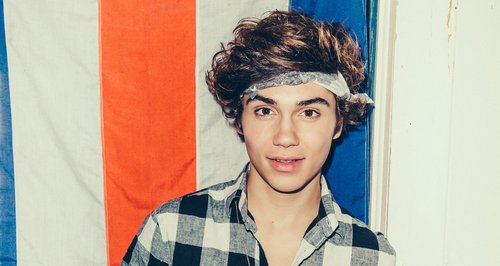 If you've ever been lucky enough to meet Union J you'll know that George gives THE BEST HUGS! And if you haven't, then here's exactly how it feels to get a #ShelleyHug...

With one of the BEST cuddles in the game Union J's George has us all in a frenzy, and judging by your tweets, #JCats, it would seem you all agree.

It's like getting rugby tackled by a baby bear

Like a magnet, he just sticks to you - there's no resisting. Don't ever let go, George!

It feels like you're wrapped in a massive duvet of love...

I just want a shelley hug right now I don't anything else will make me feel better! @georgeujworld

Just like a mummy koala, George's hugs will protect you.

Like a onesie: snug and warm, plus one size fits all! What's on the top of your birthday wish list? — hug George Shelley. Top of my everything wishlist to be honest. http://t.co/Gtdq0Mfhie

Your body WILL melt... Like the inside of a Lindt chocolate!

Like an excitable puppy greeting you at your front door, EVERY DAY.

#21ReasonsWhyWeLoveGeorge 8. He gives the best hugs, one day I'd love a George Shelley hug <3 http://t.co/u4LtXC5V0K

It'll also give you a permanent smile, like nothing else ever could.

And when all four boys are included, it can only be described as total bliss. Like listening to the Union J album for the first time.

George must give the bestest hugs I will get a hug 1day security won't stop me this time#askgeorge @georgeujworld pic.twitter.com/DuWcC226Kg