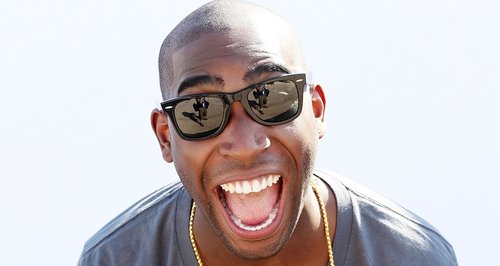 The 'Children Of The Sun' rapper also suggests he wants to persuade Katy to collaborate with him one day.

Tinie Tempah has revealed exclusively to Capital that he wants to chat with Katy Perry backstage at the Jingle Bell Ball 2013 today, and has hinted they may even talk about a potential future collaboration.

Tinie Tempah on wanting to chat with Katy Perry at the Capital JBB...

The 'Trampoline' rapper is one of the many huge artists who will take to the O2 Arena stage tonight (7th December) to perform on the Jingle Bell Ball stage, and Tinie says he is determined to get to meet 'Roar' star Katy before the show.

"I definitely want to have a chat with her because I'm a big fan of her and we were actually signed to the same label in America a while ago, so it would be great to talk to her," Tinie told Capital's showbiz reporter Kevin Hughes. "Maybe talk about a collaboration one day who knows?"

Tinie Tempah will be joined on the night one line-up of the Jingle Bell Ball 2013 by the likes of Union J, Rizzle Kicks, Disclosure, Ellie Goulding and Katy Perry.