Tinie Tempah & Katy B Wow At #CapitalJBB… Then Tinie Was Joined By Jess Glynne On Stage!

The #CapitalJBB crowd had a surprise in store after Katy & Tinie's performance... and they went CRAY CRAY for it.

Two of the UK’s HOTTEST homegrown talents teamed up to thrill Capital listeners this weekend when Tinie Tempah and Katy B headed out to play Capital’s Jingle Bell Ball With Coca-Cola.

They’re two absolute fan favourites - and clearly firm friends - so it’s no surprise Tinie and Katy looked like they were having an absolute BLAST when the opening chords of their team-up track ‘Turn The Music Louder (Rumble)’ hit the loud speakers and sent the crowd crazy.

It’s been one of the biggest dance tracks of the year - never failing to impress when it comes on-air - and the 16,000 strong audience loved getting to experience the KDA-produced hit live at London’s The O2.

Between them this pair have 4 MOBOs, 2 BRIT Awards and a STRING of Vodafone Big Top 40 hits they were looking totally comfortable up on that stage entertaining the masses.

But next up was one of the night’s BIGGEST surprises when Tinie stayed out on stage… to be joined by fellow #CapitalJBB star Jess Glynne for a duet of their track ‘Not Letting Go’. 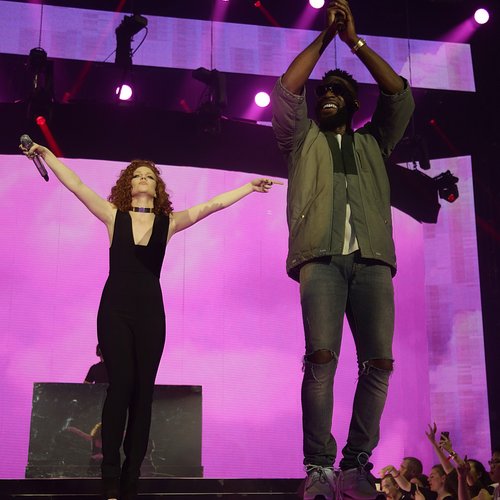 "I am only supposed to do one song but I can’t come to the O2 and  do just one song. Capital JBB if you guys want to hear one more make some noise!!!" Tinie shouted out to the crowd.

The crowd popped HARD when Jess made her way out and launched into the Vodafone Big Top 40 number one alongside her mate Tinie, and it was clear from the grins on their faces that this was a true career highlight for this pair.

Tinie Tempah… this is why you’re one of our FAVES!