Ooh Is James McVey From The Vamps Dating Sophie Turner From Game Of Thrones?! 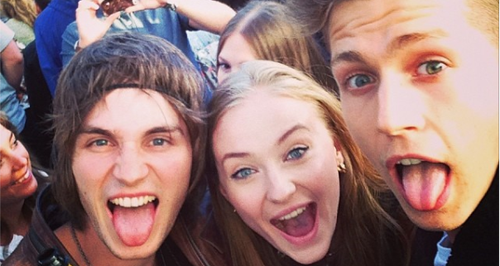 Is The Vamps guitar guru and topless selfie taker, James McVey, dating Sophie Turner from Game of Thrones? He’s taken her to Nando’s and everything…

James girls look away now – it looks like The Vamps hotty James McVey is taken! The guitar superstar is reportedly dating actress Sophie Turner from Game of Thrones – and he’s even taken her to Nando’s!

Yep, the pair are reportedly dating after they met through Twitter after James admitted that he fancied the actress – it’s like a love story for the digital age.

The pair were also hanging out at the beach and British Summer Time festival last week with Ellie Goulding and actress Maisie Williams, and a source told The Sun, “It’s still early days. She has just really broken into the big time through Game of Thrones and James and his band are constantly travelling to gigs. So they’re taking it pretty slowly but they do really like each other.”

Neither party has yet confirmed or denied the relationship, but James and Sophie took to Twitter to make light of the rumours last night:

@TheVampsJames #photoshop. please stop . You're freaking me out. First you tweet that picture that my friend took of me at nandos & now this

So ARE they actually just friends or is it a case of 'he who doth protest too much'…? All we know is, you never turn down a good Nando's!