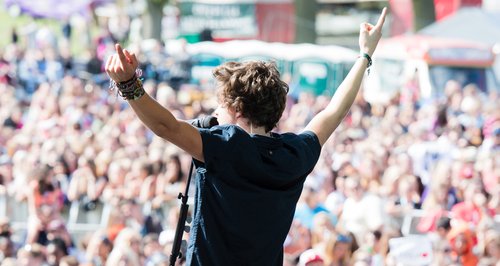 The group have unveiled a live performance montage video of their debut single 'Can We Dance' - which is released today.

The new music promo produced exclusively for Capitalfm.com features footage of Bradley, James, Connor and Tristan on stage during their recent live shows including North East Live and Fusion Festival in Birmingham.

Check out The Vamps - 'Can We Dance' (Live Performance Video) below..

Download The Vamps debut single 'Can We Dance' here.

The boys joined us in the Capital studio earlier this week for a live webchat with their #Vampettes where the boys revealed all about filming the official 'Can We Dance' music video, the progress of their debut album released next year, plus which member of the band really is the best at twerking.

Check out a picture of The Vamps twerking below...

The Vamps shot to fame on YouTube after covering hit singles from the likes of Taylor Swift, The Wanted and Lawson.

Tune into the Vodafone Big Top 40 on Capital today from 4pm to see where The Vamps new song 'Can We Dance' charts.