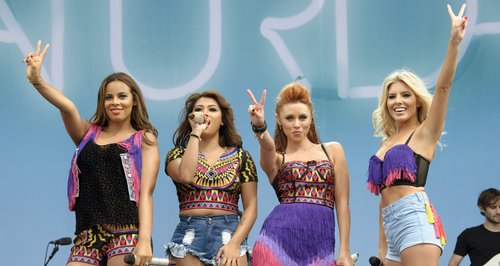 The four-piece took to the stage without pregnant bandmate Frankie Sandford at the UK festival.

The Saturdays performed without band member Frankie Sandford over the weekend at V Festival 2013, as Rochelle Wiseman and Una Healy's husbands watched from side of stage.

The 'What About Us' band took to the stage at Weston Park and Chelmsford on Saturday and Sunday to wow the V Festival crowd with hits from across their career, but Frankie is currently taking a short break from the band as her pregnancy due date approaches.

Rochelle's husband, and Capital FM presenter Marvin Humes, as well as Una's husband Ben Foden were spotted watching the girls perform live on stage up on a balcony, cheering them on and sharing some jokes from the sidelines.

View a snap of Capital FM's Marvin Humes taking in the band's performance below (Credit: Getty):

"Had an amazing two days at V!! Thank you to each and every one of you who came to watch us open the show! I will never forget it x," Mollie King tweeted soon after the show.

Check out a picture of Una Healy and her rugby star boyfriend Ben Foden relaxing backstage at V Festival below (Credit: Getty):

The Saturdays performed all of their most popular hits for the set, including their brand new single 'Disco Love' which received its first play on Capital FM earlier today (19th August).