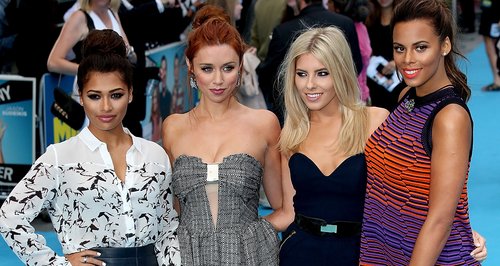 The 'Gentleman' band got dolled up for the a-list premiere this week in London.

The Saturdays have spoken about their excitement at getting to say hello to Jennifer Aniston last night at the UK premiere of new film We're The Millers.

The 'What About Us' band were pictured dressed up for the London Leicester Square premiere on Wednesday evening (14th August), and have been tweeting about how much they enjoyed the film.

Mollie King, Vanessa White, Una Healy and Rochelle Wiseman also admitted how surreal it was to see Friends star Jennifer Aniston, who stars in the film, in the flesh.

"Absolutely LOVED #WereTheMillers last night…we even said a sneaky 'hi' to Jennifer Aniston!!" The Saturdays posted after the premiere, while Mollie tweeted: "Can't believe we've just seen Jennifer Aniston in real life!! I've been watching Friends since I was 11!!! #DreamsComeTrue."

Mollie opted for a strapless jumpsuit, Vanessa paired a white shirt with a leather pencil skirt, Una dressed up in a grey strapless number and Rochelle kept things colourful in a shift dress.

Bandmate Frankie Sandford was absent from the event as she is taking a short break from the band ahead of her pregnancy due date.

The Saturdays are preparing to play V Festival 2013 this weekend and their new single 'Disco Love' is set to be unveiled very soon.