Take That To Perform At Glastonbury Festival 2013?

The band's singer Mark Owen reveals the group will be meeting up soon to talk about the possibility of an appearance at Worthy Farm.

Take That have ignited rumours they could be making a surprise appearance at Glastonbury Festival this year.

'Rule The World' singer Mark Owen told The Sun that the band are meeting up soon and will be discussing the chance of taking to the stage at the event in June.

"I love Glastonbury. I would go there, definitely," he declared. "We're all meeting up in a few weeks, so we'll see."

Robbie Williams will be appearing at a series of stadium dates the same month and reunited with the group in 2010 for a new album and reunion tour in 2011.

Reports around the headline acts of the event have been rife for month, with Prince the latest name linked to one of the slots.

The 2011 show was headlined by Beyonce, U2 and Coldplay. 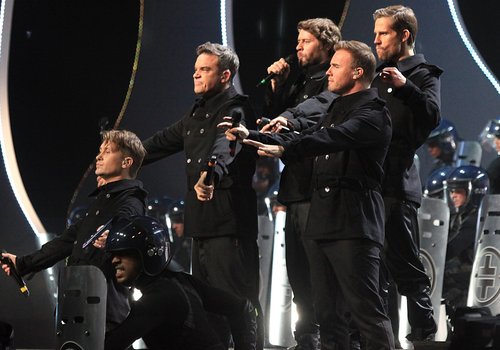 Kasabian guitarist Serge Pizzorno also dropped a hint that The Rolling Stones will be making an appearance on the Pyramid Stage this week.

The full line-up for the festival is expected to be announced in April with the event taking part across the weekend of 28th-30th June.