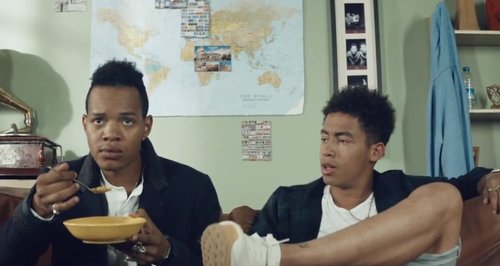 The hip-hop duo show off their dance moves and acting skills in the brand new video.

The 'Mama Do The Hump' duo unveiled the song last month with a first play on Capital FM, and have now premiered their first music video of 2013.

Jordan Stephens and Harley Alexander-Sule teamed up with the GoThinkBig Initiative for the video, directed by Jamie Thraves, by giving 150 young people the chance to help produce the promo piece.

The 'Down With The Trumpets' pair kick off the video sat on the couch having breakfast before realising they're on a television show, before heading out to a park for a huge dance-off with friends.

Check out the music video for Rizzle Kicks' new song 'Lost Generation' below:

The UK hip-hop stars are set to return with their second studio album 'Roaring 20s' which officially drops on 2nd September.