The 'I Need You Tonight' rapper got to meet the Extras comedian and actor during the weekend's awards show.

The 'Read All About It' rapper dressed up in a navy blue suit and white shirt for the prestigious awards ceremony, and later tweeted fans to show them he had got to meet British comedian Ricky Gervais.

"I never ask anyone for a picture but look who I just met!" Professor Green tweeted during the event, alongside a picture of him and Millie with The Office star.

The UK rapper was attending with awards ceremony alongside Millie and her Made In Chelsea co-stars, who were all jointly nominated in the Reality & Constructed Factual category.

View a picture of Professor Green meeting Ricky Gervais at the BAFTAs below (Credit: Twitter): 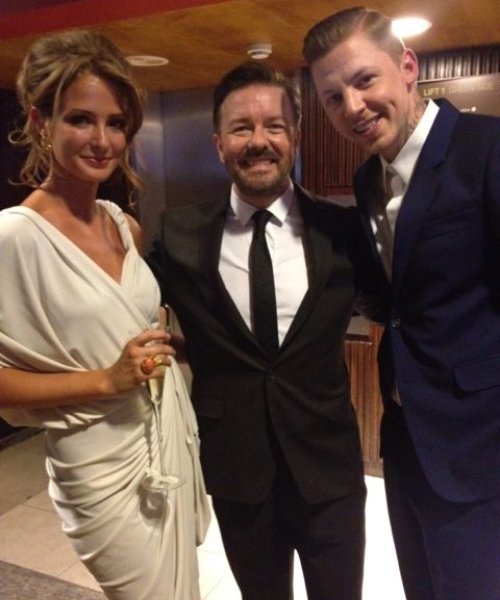 Professor Green unveiled the music video for his latest single 'Remedy' earlier this month, and is currently starting work on his third studio album following 2011's 'At Your Inconvenience'.

The 'Never Be A Right Time' rapper is also working with 'Hot Right Now' producer DJ Fresh on a new song for his next studio offering.

View a picture of Professor Green and Millie Mackintosh at the BAFTA Awards 2012 (Credit: PA):