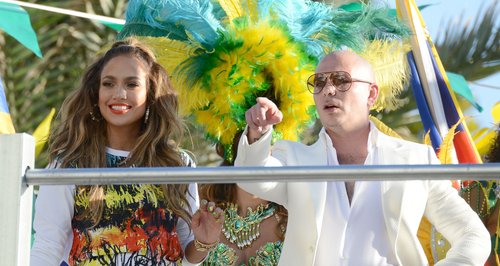 The 'Live It Up' pair were spotted on the set of their new video out in Florida this week.

Pitbull and Jennifer Lopez have been spotted filming their carnival-themed music video for their official 2014 World Cup anthem.

It was announced earlier this month that the regular collaborators have reunited once again to record a song called 'We Are One (Ole Ola)' as the football event's official theme song.

On Tuesday (11th February) Jennifer was spotted shooting several party scenes for the music video out in Fort Lauderdale, Florida, wearing a cropped top to show off her toned midriff.

'We Are One (Ole Ola)' marks the fourth collaboration between J-Lo and Pitbull, after previous hit team-ups like 'On The Floor', 'Dance Again' and 'Live It Up'.

hanging out with @JLo and @ClaudiaLeitte today #WeAreOne

Enrique Iglesias stopped by Capital recently where he confirmed that he also sings on the track after asking if he could be involved.

Jennifer Lopez, Pitbull and guest vocalist Claudia Leitte are expected to perform the song live for the first time at the 2014 World Cup opening ceremony on 12th June in Sao Paolo, Brazil.