“He’s Changed My World”: Pharrell Williams Is SUPER Cute About His Son, Rocket! 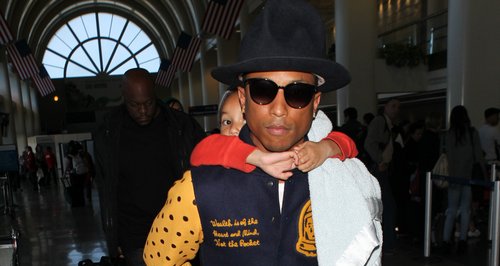 Is there anything cuter than Pharrell gushing about his son, Rocket? We don’t think so.

The greatest hat-wearer of all time (probably), aka Pharrell Williams has opened up about his relationship with his 5-year-old son – and what he has to say is incredibly adorable!

Pharrell was speaking at the NBA 2K15 press conference on Monday and revealed to reporters that his son, Rocket (excellent name, by the way), teaches him about technology. He said, “He's changed my world. My son teaches me." Awww!

“It's crazy, he teaches me [about video games and the latest gizmos and gadgets]. This is one of those times in your life when you're like, 'Think about that one interview when someone asked you a serious question, and it just hit me… When you asked me about my son and my answer to you was, 'He teaches me?'" Like, that was bizarre to me."

And it seems Pharrell isn’t the only one besotted by Rocket, a source close to the singer told Us Weekly, “Rocket is sooooo adorable. He's a genius already. He's gonna be just like his parents. They are all three like kids together. They know how to live life." Well if he’s already teaching his dad some tricks at FIVE, he sounds like a child genius!