Maroon 5 At The iTunes Festival 2014: The Best Bits 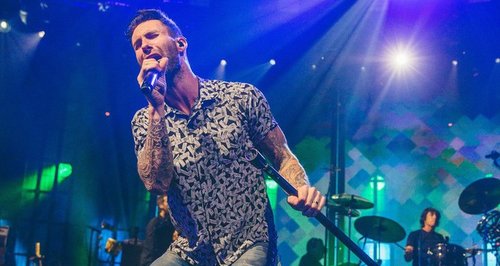 Back after what feels like FOREVER, Maroon 5 played Camden's Roundhouse for the iTunes Festival 2014 and we have ALL the best bits for you.

We've missed Adam Levine working up a sweat on stage alongside the rest of Maroon 5, and it seems his time away from the UK stage has all got a bit too much for him too - too much bouncing around on stage meant he had to stop and start his performance of 'Moves Like Jagger'!

The amazing Maroon 5 performed their classic hits like 'She Will Be Loved' and 'Sunday Morning' before raising the tempo with some hits that got the crowd jumping; 'Moves Like Jagger' and their new single 'Maps'.

Maroon 5's latest offering had the crowd on their feet - they've been waiting a long time for this one!

A Maroon 5 classic, the entire Roundhouse was singing along to every word.

It all got a bit slow and sexy as Adam Levine and co took it back to 'Sunday Morning'.

It was hands in the air time - listen to Adam hitting those high notes!

The crowd went insane before Maroon 5 had started singing 'Moves Like Jagger' - and boy were you guys cutting some shapes in the crowd!