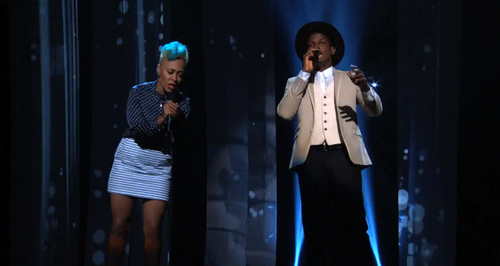 The pair performed their duet 'Beneath Your Beautiful' on the hit series this week.

Labrinth and Emeli Sande's duet 'Beneath You Beautiful' has seen a huge rise on the US iTunes chart following a performance of the track on the hit show America's Got Talent this week.

The song has previously topped the Vodafone Big Top 40 in the UK and looks set to enjoy similar success across the pond.

The singer and producer was also thankful for all the love for the performance on Twitter as it jumped 33 places into number five.

He wrote: "Thanks for all of the tweets about our @nbcagt performance! America you have been on it."

Check out Labrinth and Emeli Sande's performance of 'Beneath Your Beautiful' from America's Got Talent below:

Meanwhile, Labrinth has been teasing details of his new studio album.

He's also predicted a duet with Ella Henderson is likely to take place in the near future.