The 'Tik Tok' singer has also revealed what influenced the concept behind her latest music video 'Crazy Kids'.

Ke$ha has explained why she got cornrows for her new music video 'Crazy Kids'.

The 'Die Young' singer says the new look she adopted in the video was partly inspired by 'From G's To Gent's' rapper Riff Raff.

"The hair, it took four hours to get it braided and I had to sleep in a do-rag. And, I'm just really proud of that hair," she continued. "I like kind of looking like a gangster." 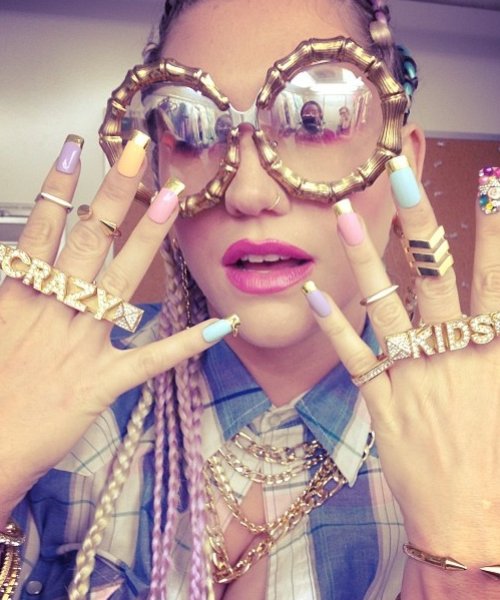 The 'C'Mon' singer went on to explain that she got the idea for her new single from a birthday party she attended.

"That particular birthday party was really bad… and fun," the 'Warrior' singer remembered. "But at the end of the night, I was having so much fun, at like 7 a.m. I was literally jumping by myself on a mini trampoline going 'I'm having so much fun.'"

"Then, for my birthday party, I got a tattoo artist, so everybody who came could get a tattoo to remember the night," she continued.

"As I look around the room, there's a lot of kids with glitter and wild style and you like to express yourself, right? I feel like for those of us that like to express ourselves and aren’t so concerned with being super-duper normal, that you’re called kind of crazy a lot," the star explained.

"And instead of it being a negative thing, I wanted it to be an anthem like, 'Yeah we're crazy!'"

Ke$ha hits the road with Pitbull on a joint tour of North America this summer.