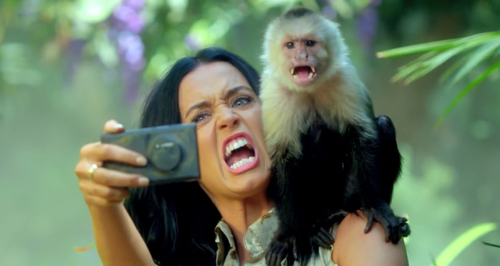 The 'Firework' singer gives fans a behind the scenes look at her recent promo.

Ahead of the premiere of Katy Perry's new video for her latest single 'Unconditionally', she has released the making of her last promo for 'Roar'.

The video saw the singer heading to the jungle and being joined by a bunch of animals for a fun-filled video.

During the making of footage, the singer explains all the scenes and can be seen playing around with some of the many animals on set.

The track was the first to be lifted from her latest album 'Prism' and went straight to the top of the Vodafone Big Top 40 chart when it was released.

Meanwhile, Katy will be heading back over to the UK next month for night one of Capital's Jingle Bell Ball 2013.

She will perform at London's O2 Arena on the same night as the likes of Tinie Tempah, Disclosure and Olly Murs.