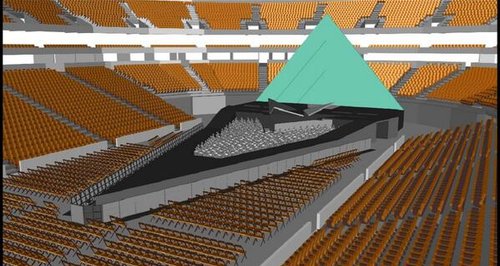 The 'I Kissed A Girl' singer said the image was a gift to fans ahead of the pre-sale of her North American dates.

Katy Perry has treated fans to the first image of what the stage on her 'Prismatic' world tour will look like.

The 'Hot N Cold' singer posted the shot to her Twitter account yesterday (20th January) and it reveals a giant green prism with a stage stretching out deep into the crowd.

Fans went wild with excitement on Twitter upon seeing the image with some Lady Gaga fans also piping in to say they noticed similarities with Mother Monster's 'Monster Pit' she had for her 'Born This Way Ball' outing last year.

It's the latest battle between fans of both stars following last year's disputes on Twitter.

@katyperry I love the monster pit!

@withponny @katyperry I'm so sorry but she cannot hear you with the 49.000.000 katycats that are screaming her name right now! Ps:SHUT UT ;)

Both artists have always tried to diffuse any animosity between the two fan camps, but it looks like the debate has started up once again.

Katy Perry will bring her 'Prismatic' world tour across to the UK this may with US dates taking place across the summer.