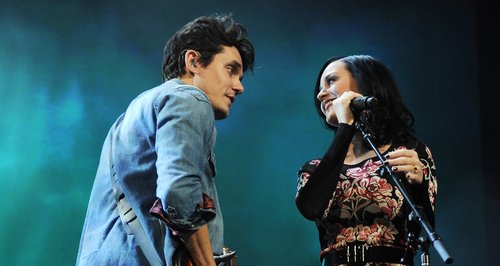 The 'I Kissed A Girl' singer sees her boyfriend send a couple of tweets during the show.

John Mayer was seen hijacking his girlfriend Katy Perry's Twitter account this week as they watched a Fleetwood Mac gig.

The couple were in attendance for a show by the legendary group at the end of 2013 with female singer Stevie Nicks even dedicating the song 'Landslide' to Katy and John.

John here. Katy can't write because she's getting over Stevie Nicks dedicating Landslide to us at the Fleetwood Mac concert. Unforgettable.

While I'm at it I have a couple things I'd like to get off my-oh, she's motioning for the phone back. Gotta go!! -JM

"John here. Katy can't write because she's getting over Stevie Nicks dedicating Landslide to us at the Fleetwood Mac concert. Unforgettable," he wrote via her account.

Katy had a busy few days over the New Year's festivities – attending the opening night of Britney Spears' Las Vegas residency but also performing herself at Ceasar's Palace.

Many are expecting John and Katy to get hitched in 2014 with the male star recently heard referring to Katy as his "wife" backstage on a TV interview last month.

Meanwhile, Katy will be heading back over to the UK for her 'Prismatic' world tour in May.