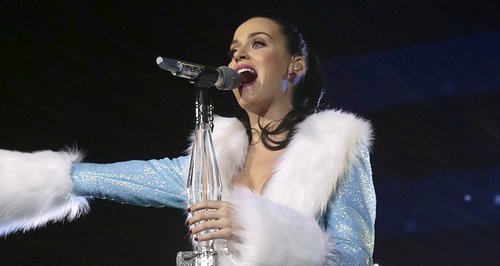 The popular US producer has caused speculation that Katy has tasked the rapper to feature on her single.

Dr. Luke has sparked speculation that Katy Perry has tasked Pitbull to feature on a reworked version of her song 'Dark Horse'.

The US producer, who worked on the song for Katy's album 'Prism', tweeted to praise Pitbull for his "verse" on the song, despite the official version of 'Dark Horse' only featuring rapper Juciy J.

"@Pitbull great verse on #DarkHorse!!!! @KatyPerry!" Producer Dr. Luke tweeted this week causing fans to quickly query the tweet, before he then replied that the Juicy J version of 'Dark Horse' is still the only collaboration.

Just to clarify.. the only collaboration on Dark Horse is the original with my man @therealjuicyj !!!!

@KatysSunflower i heard a version with him on it… that's why… :-)

Earlier this week Katy confirmed she is considering releasing 'Dark Horse' as her next official single due to the track's positive response from fans.