The 'SexyBack' star's fans will get the chance to join the experience using a unique hashtag.

Justin Timberlake will offer fans an interactive behind the scenes look at the making of his new 'Take Back The Night' music video.

The promo will debut in full tomorrow (30th July) and MTV News spoke to the singer's spokesperson who revealed all about how fans can get a unique experience looking behind the scenes.

Fans who join the interactive hashtag campaign will be taken "on a fun, virtual journey throughout New York City, from the legendary Yankee Stadium to historic locales in Chinatown and unlock secrets of the video by touching images to gain fun facts and expand the experience on the making of the [video]."

The video was directed by Jeff Nicholas, Jonathan Craven and Darren Craig for The Uprising Creative - the same company behind his recent 'Tunnel Vision' video. 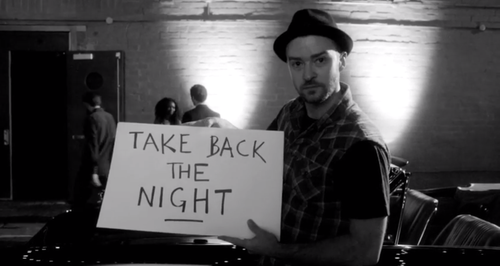 Meanwhile, Timbaland recently confirmed a new collaboration from Nas which will feature Justin and Jay-Z.