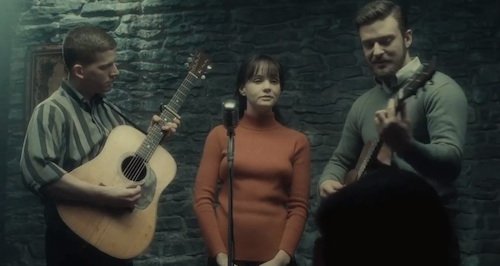 The Hollywood star worked with the 'SexyBack' singer on new film Inside Llewyn Davis.

Carey Mulligan has been speaking to Capital about working with Justin Timberlake on new movie Inside Llewyn Davis and was full of praise for the singer.

The film is based around a travelling folk singer and has been directed by the famed Coen Brothers.

Asked if the 'Mirrors' singer should continue to focus on folk music in the future, she said: "He could do anything. I mean he could do a folk album."

Carey continued: "He can do anything – that's what's so irritating about him. He's so multi-talented. But yeh, he sounded amazing."

Earlier this year, Justin revealed to Capital how he collaborated with Carey's husband Marcus Mumford on a track for the record.

The film will hit cinemas in December and was premiered at the BFI London Film festival this week.

Meanwhile, Justin is preparing to head to the MTV EMAs next month - where he is among the top nominated stars.