The 'Who You Are' singer jokes how she needs more towels on stage now with her latest look.

Jessie J took to Twitter last night (24th April) to tell fans it was great to be back performing as she made her first on stage appearance with her shaved head in London.

The 'Who's Laughing Now' star performed at an Adobe Summit party in the capital and said she was heading straight to the studio after her performance.

"Sweaty after show! Now to the studio I go! Working hard! Feels good to be back! Massive shout out to the crowd you were killer tonight! What a vibe! X," she tweeted.

The Voice coach also joked how she needs more towels on stage now with her head getting sweaty.

She added: "On stage tonight! Wow first show with short hair! Amazing! Now I get why men have towels on stage! I need towels now! Lol" 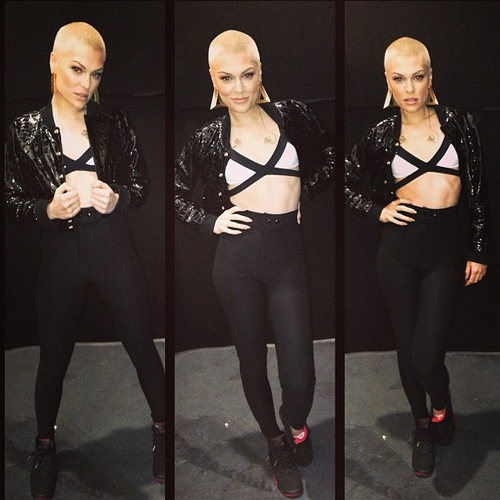 The 'Domino' singer said goodbye to her locks for charity back in March and is currently busy working on her new album.

Jessie has been updating fans on progress of the record for the past few months and recently tweeted lyrics from new songs on the social networking platform.

Jessie is also among the named confirmed this morning to be appearing at the Capital FM Summertime Ball 2013.