The 'LaserLight' singer is getting ready to perform at Buckingham Palace for the Queen next week.

Jessie J has shared a picture with fans of rehearsals for her upcoming performance at the Queen's Diamond Jubilee Concert.

The 'Domino' singer is set to perform at Buckingham Palace on Monday (4th June) as part of an event to celebrate Queen Elizabeth II's sixtieth year as reigning monarch of the UK.

"At jubilee rehearsals :)," Jessie simply tweeted earlier today (30th May), alongside a picture of her posing at the venue.

Jessie is set to perform on a specially constructed stage around the Queen Victoria Memorial at the Gary Barlow-organised event, on a line-up that also includes Ed Sheeran, JLS, Elton John and Paul McCartney.

The 'Who You Are' singer was presented with the award for Best Solo Artist at Glamour Magazine's Women of the Year Awards in London yesterday (29th May), and also sent a special message celebrating her victory at the ceremony.

She posted: "Tonight was very Glamourous… Lovely to have a night out with wonderful people and get dressed up."

Jessie J added several dates to her upcoming 'Nice To Meet You' UK arena tour earlier this month, which is set to launch in Nottingham on the 26th February 2013.

View a picture of Jessie J rehearsing for her performance at the Queen's Diamond Jubilee Concert below (Credit: Twitter): 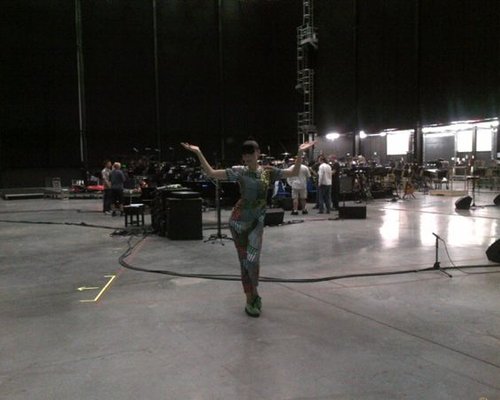