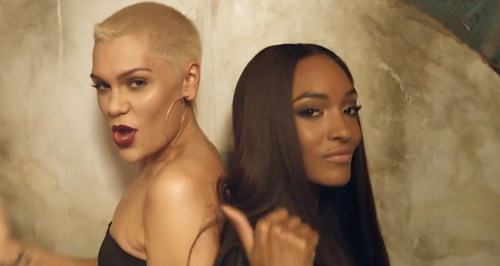 The 'Wild' singer opens up about the celebrity cameos in the video for her second single of 2013.

Jessie J has opened up about some of the surprise guest stars in her new music video for 'It's My Party'.

The 'Do It Like A Dude' singer dropped her new video earlier today (8th August) which boasts several big name cameos from the likes of supermodel Jourdan Dunn and British singer-songwriter Daley, as well as some of Jessie's best friends.

"It was really fun. It was amazing to have the guests that I've got in there," Jessie revealed exclusively to Capital FM ahead of the video's unveiling. "Obviously my best mates Claire and Holly were in the video. Daley pops up in there.

"It was an amazing day, I had Jourdan Dunn in the video, who's a supermodel," she explained. "[It was Jourdan's] first music video, so that was really fun for me to experience that with her. Sitting next to a supermodel!

"It was fun, it's like a straight up party video," Jessie added.

Jessie J teases her 'It's My Party' music video...

View a picture of Jessie J partying in her new music video below:

The video was unveiled this week and 'It's My Party' follows 'Wild' as the second single to be unveiled from Jessie J's new album, which is officially due for release on 23rd September.

Jessie J has also recorded a new song called 'Magnetic' for the soundtrack of new fantasy epic The Mortal Instruments: City Of Bones.