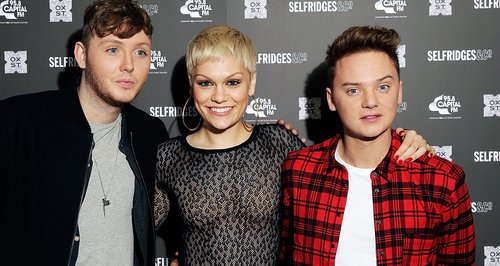 The 'Thunder' singer also performed live at the Christmas lights switch-on event in London this week.

Jessie J says she is feeling "on top of the world" right now after bringing her 'Alive' arena tour to a close and performing at the Oxford Street Christmas lights switch-on event.

The 'It's My Party' singer was joined for the event by both Conor Maynard and James Arthur to turn on the street's iconic Christmas lights display, and exclusively spoke to Capital about bringing her 'Alive' tour to an end earlier this week in Cardiff.

"The tour is amazing, it was so successful," Jessie revealed to Capital FM at the celebration ."It sold out, two nights are nearly every venue, two nights at the O2 [Arena].

Listen to Jessie J chatting to Capital FM at the Christmas lights switch on event below:

Jessie J reflects on the end of her 'Alive' tour...

"I'm on top of the world right now," she explained. "My single's doing really well, my album's doing well.

"Yeah, I feel like I'm in a great place," Jessie added.

The 'Wild' singer opted to wear a sheer top and bright red trousers while walking a red carpet at the event, although she changed into a sleek black dress for performances of 'Price Tag' and her new single 'Thunder'.

Check out a picture of Jessie performing 'Thunder' at the Christmas event below:

"I did it! I performed on a stage really high up! I faced my fear!" Jessie tweeted soon after the show. "Thank you SO MUCH to everyone who came out and sang with me and made it less scary!"