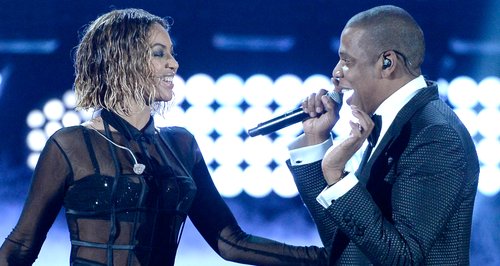 The '99 Problems' rapper is forced to present the US star with one of her Valentine's gifts early.

Jay-Z reportedly treated his wife Beyonce to an early symbolic Valentine's Day gift, after presenting her with a promise bracelet only he has the key to.

According to reports this week, the US rapper splashed out over £2000 for the silver and gold mixed-metal bracelet by Tacori, which is opened with a heart-shaped key.

Jay-Z was allegedly hoping to present the 'Love On Top' star with the gift alongside some other presents for Valentine's Day today (14th February) but ended up treating his lady early.

"Jay was waiting for Valentine's Day to gift her along with a few other presents, but Beyonce is always too eager and you can't hold any secret from her," People reports through a source this week. "So he decided to give it to her earlier."

> Watch Beyonce taking a leap from her private yacht during a family holiday!

Beyonce and Jay-Z recently enjoyed a romantic holiday away in the Mediterranean.