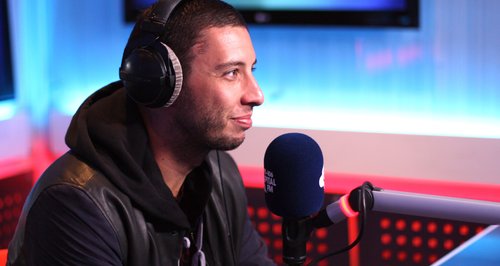 The ‘Kids Again’ singer will present his pick of the freshest club tracks every Saturday night this month from 7pm.

Chart-topping star Example is the latest addition to the Capital FM presenter line-up.

The 'Changed The Way You Kissed Me' star will kick-start your Saturday nights throughout February with his pick of the freshest club tracks, and best remixes of some big Capital tunes.

Example is no stranger to us here at Capital after performing at both the Jingle Bell Ball and Summertime Ball in previous years, plus regular appearances on the Capital Breakfast Show.

Talking about his new show the singer said, "To host my own show, and have the chance to play some of the freshest dance tracks to Capital's listeners across the country, goes even further in cementing the great relationship we already have. I can't wait to get stuck in!"

Example releases his brand new single ‘Kids Again’ on March 16th. The single is the lead track from his fifth studio album due out later this year.

Tune in to Example’s first show on Capital this Saturday (15th February) from 7pm.

[[ This video has been removed ]]
Example - All the Wrong Places on MUZU.TV.