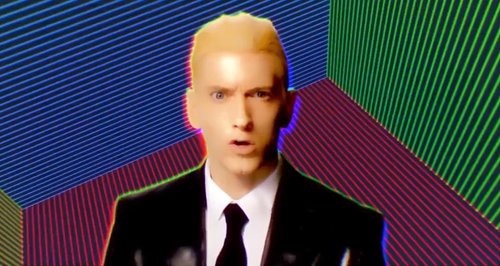 Watch as Slim Shady unveils the promo to the track from his album 'The Marshall Mathers LP 2'.

*Warning, this video features strong language and material which may cause offence*

The track is lifted from his recently released studio album 'The Marshall Mathers LP 2'.

The video was directed by Rich Lee, who has previously worked with the rapper on 'Not Afraid' and 'Lighters'.

It was filmed at the Russell Industrial Centre in Em's home city of Detroit.

Em channels the 80s TV character Max Headroom as well as getting plugged into a machine before awakening to deliver his devastatingly face rap verse towards the climax of the track.