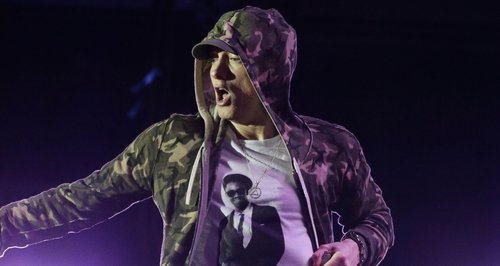 The 'Monster' rapper is said to be back recording with his old rap group ready for a new album.

The 'Berzerk' rapper, who returned with new album 'The Marshall Mathers LP 2' in 2013, is said to have laid down three new tracks with the Detroit-based rap group recently.

According to producer Mark Bass, the rap collective are working on a brand new album at present, their first since 2004's 'D12 World'.

> 8 Ways To Tell If You're Eminem's Number One Fan!

"He's also been mixing new material by the mercurial funk pop giant Sly Stone with members of the original Family Stone band, along with new D12 tracks, including three with Eminem," an article in the Detroit Free Press claims.

D12 have not released any new music together since the death of group member Proof back in 2006.

Eminem recently returned with his music video for 'The Monster' with Rihanna.