Dr. Dre Says Eminem Is "Finishing Up" His New Album

The 'Stan' rapper is expected to release the record in the summer ahead of his festival appearances.

Eminem is in the process of "finishing up" his new album, according to longtime collaborator Dr. Dre.

The album has previously been expected to be released in the summer, with Dre revealing to Power 106 that he is almost ready to sign off the record.

"Em is finishing up his project," he told the US station. "And for me, I've just gotten inspired to go back in the studio, so I'm really just having fun with life and having fun being creative and just trying some new and different things with myself."

The US star is predicted to debut material from his latest record when he takes to the stage at the Reading and Leeds Festivals this summer.

He first teased details of the record via a commemorative baseball cap on his official merchandise store which listed 2013 as a year he will release an album. 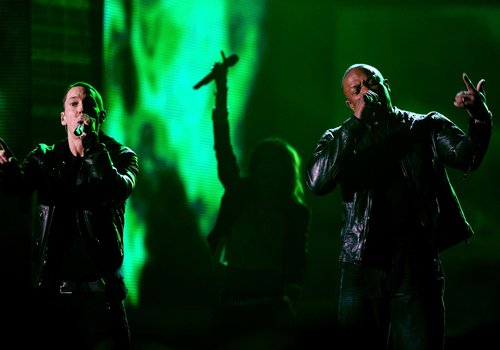 Meanwhile, country star Taylor Swift recently admitted that she would love the chance to team-up with the rapper in the future and wants to explore her love of hip-hop.

Eminem's new album will be his eight and the first since 2010's 'Recovery'.