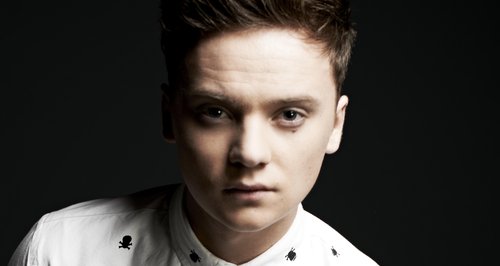 The 'Can't Say No' star also says he can't wait to see Pharrell and Ellie Goulding play the event.

Conor Maynard has revealed plans to hunt down Pharrell Williams at the BRIT Awards 2014 this month to discuss a new collaboration.

The 'Happy' singer served as a producer on Conor's 2012 debut 'Contrast', and the 'Can't Say No' star says he is keen to repeat the success with a new team-up

"I can't wait to see Ellie Goulding and Pharrell [Williams] perform at the BRITs this year," Conor revealed to The Metro this week. "And I want to talk to Pharrell about working together again.

"I am proud as ever to be part of the British music business and I'm looking forward to perform during BRITs week," he continued, fresh from the news he will headline a one-off gig to celebrate the event.

Towards the end of 2013 Conor revealed he is working hard on his second album, and has even recorded a new song with US producer Timbaland.