The 'Don't Wake Me Up' singer takes part in a special campaign this past weekend in Los Angeles.

Chris Brown was seen donating trainers to a group of high school children this weekend as he took part in a special Reebok Unity campaign.

The 'Turn Up The Music' singer said it was great to be involved and give back to the community.

"I used to have to borrow my cousin's clothes," he told People at the Los Angeles event. "So being able to come from that poverty-stricken environment and then being able to get out of it is what I tried to [do]. ... I just want to show the kids and have them have a better light of opportunities for them to do what they need to do."

The star was also vocal on Twitter as he thanked those involved. 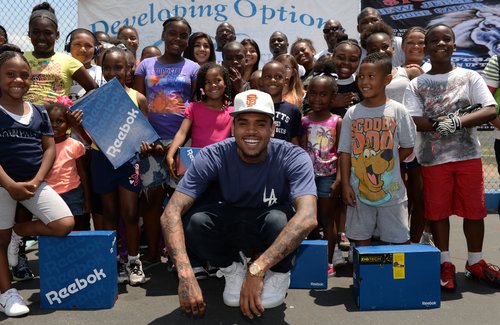 He wrote: "Thank you for allowing me to continue to inspire change in the world. Today was a great step forward! #UnityCampaign".

Chris also gave fans an insight on what to expect on his forthcoming album and said collaborations with the likes of Nicki Minaj, B.o.B and Kendrick Lamar would all be included.

He also confirmed his duet with Rihanna would also make the final cut, despite previous reports.