The 'Fine China' singer was seen sharing champagne with a women while partying in LA on Saturday.

Chris Brown was spotted holding hands with a mystery blonde this past weekend while enjoying a night out in Hollywood.

The 'Turn Up The Music' star, who is dating Bajan singer Rihanna, was seen dancing and enjoying drinks with the unknown woman while out with friends at Playhouse nightclub in Los Angeles on Saturday evening (6th April).

Chris turned up to the club in a white logo t-shirt and backwards baseball cap, where he was seen holding raised hands with the woman while passing her a bottle of champagne as they revelled in the festivities.

According to the Daily Mail the two left the club together along with Chris' entourage and a number of other women, bundling into two separate cars to head off from the venue.

Check out a picture of Chris Brown and the mystery blonde this weekend below: 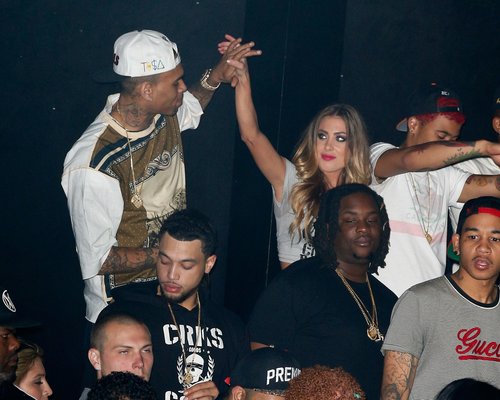 This past weekend also saw Rihanna spotted out away from her singer beau as she took in a game of basketball alongside a friend, eventually bumping into fellow musician will.i.am at the event.

Chris Brown is preparing to release his new album 'X' this summer, after unveiling the video for new single 'Fine China' last week.