The 'Turn Me On' DJ and producer promises fans a "monster' of a music video.

Chris Brown and David Guetta have been pictured together on the set of their new music video for 'I Can Only Imagine'.

The 'Beautiful People' rapper features on David's latest 'Nothing But The Beat' single, and the French DJ promises fans they are working on a "monster" video for the song.

"On the videoshoot of I Can Only Imagine #ICOI with @chrisbrown this guy rocks!" David tweeted yesterday (29th May). "Be ready for a monster video."

He later posted: "With @colintilley the director of #ICOI video. So talented!"

'I Can Only Imagine' is the sixth single to be released from David Guetta's 2011 album 'Nothing But The Beat', following hits like 'Titanium', 'Turn Me On', and 'Where Them Girl At'.

'Turn Up The Music' singer Chris currently working on several solo music videos, having promised videos for both 'Till I Die' and 'Don't Wake Me Up', and premiered his 'Sweet Love' video last week.

Chris Brown is set to release his new album 'Fortune' on 3rd July.

View a picture of Chris Brown and David Guetta on the set of their music video for 'I Can Only Imagine' below (Credit: Twitter): 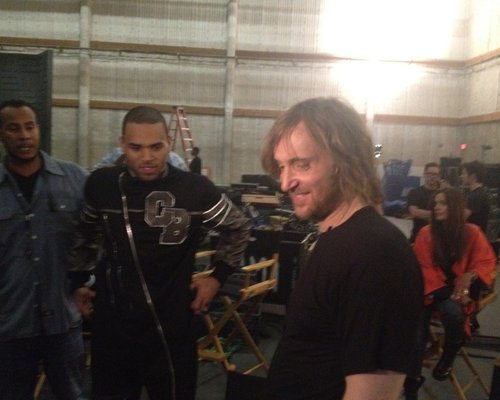