The 'Turn Up The Music' star has teamed up with 'The Boy Is Mine' star for her latest single.

Chris Brown can be seen dancing topless in front of a multi-coloured painted wall in the vibrant trailer for Brandy's new single 'Put It Down'.

The 'Don't Wake Me Up' star has teamed up with the 'Long Distance' singer for the lead single from her latest album and the first since 2008's 'Human'.

The short teaser sees the R&B star also sporting a pair of dungarees as he watches the American star dance in front of a Ferrari sports car during another scene.

Chris was recently seen out in Cannes where he was filming a music video alongside Ludacris and Swizz Beatz for their collaborative track 'Dance Like A White Girl'.

During his stay in along the French Riviera, the singer was also rumoured to have visited his former girlfriend Rihanna.

You can watch the teaser clip for Brandy and Chris Brown's new video below:

A representative for the star denied the claims despite workers on board the 'We Found Love' star's luxury yacht confirming their meetings. 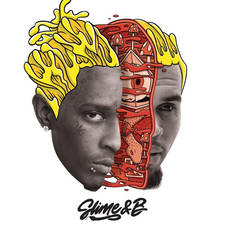