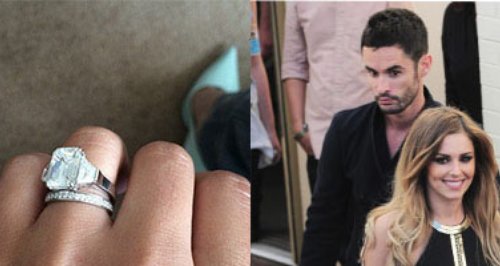 Cheryl Cole has married her fancy Frenchman, Jean-Bernard Fernandez-Versini after just three months in an intimate ceremony in Mustique. Aww!

The big question on everyone's lips is - will Cheryl Cole now be known as Cheryl Fernandez-Versini as she reveals that she wed her boyfriend Jean-Bernard last week!

Cheryl showed off a SERIOUSLY impressive rock as she posted on her Instagram account, "I usually do not discuss my personal life but to stop the speculation I want to share my happy news... Jean-Bernard and I married on 7/7/14..  We are very happy and excited to move forward with our lives together.."

The pair, who have only been dating around three months, tied the knot on the beach in Mustique in front of just four guests. A source told The Sun, "Only a handful of people knew. She’s never been so happy." Cheryl's mum and her PA were two of the guests invited to the most exclusive wedding of all time.

The source added, "Cheryl’s madly in love and had no fear about taking the plunge. She’s delighted he’s her new husband and wants to have his babies. It’s a beautiful thing. She’s on Cloud Nine right now."

And the romantic ceremony couldn't have been more different to the media storm around her first marriage to Ashley Cole in 2006. Cheryl made sure that the couple didn't announce their engagement beforehand and only ten people knew about the wedding. The source explained, "She didn't want to wait or have any of the fuss like there was when she married Ashley. This is the real deal." Aww you guys!

But how did Chezza manage to keep it so hush hush? "She turned her phone off and blocked out the rest of the world for the past week. Only a handful of people knew before the ceremony. And she’s only just started telling other friends and colleagues. It was so important to her that nobody found out beforehand because she wanted the ceremony to be something completely secret and sacred between her and Jean-Bernard.”

And it's not just Cheryl that's smitten, friends of J-B F-V have said, "He is completely and utterly besotted with Cheryl. He dotes on her and doesn’t give a damn that she's famous — which is what she has found so endearing. They genuinely believe this is for life, so there was no reason to wait."

If you want to know more about Cheryl's new husband, check out all the facts about the man himself right here.