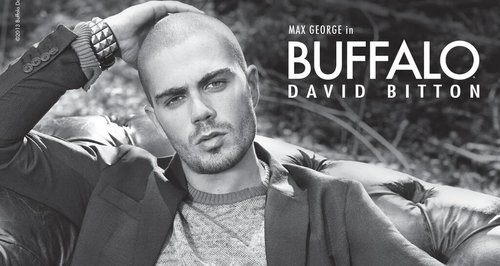 The 'We Own The Night' singer struts his stuff in the fashion brand's autumn campaign.

The 'Walks Like Rihanna' singer is seen posing alongside female model Hanna Davis in the newly unveiled shots.

Max announced last month (19th June) that he had signed a deal to promote the denim line as the new face of Buffalo David Bitton.

The Wanted star will now serve as the face of the band's upcoming Autumn campaign with the Sports Illustrated model.

"Check out my ad @BuffaloJeans," Max simply tweeted this week, alongside a link to the shots that show him posing in a dark blazer, patterned jumper and jeans.

Check out a picture from Max George's new photoshoot below (Credit: Buffalo Jeans):

Max's signing with Buffalo comes fresh from fellow The Wanted star Siva Kaneswaran being signed up to Next Model Management in the UK.