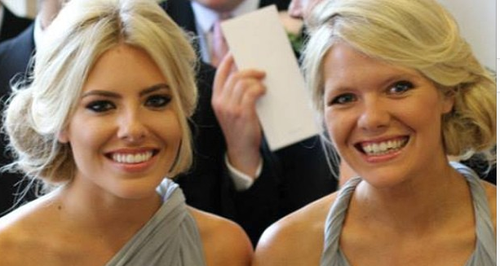 The 'Gentleman' singer revealed her bridesmaid dress to fans this week.

The Saturdays star Mollie King got the chance to be a bridesmaid over the weekend when her big sister got married.

The 'What About Us' singer showed off some pics of her dressed up for the day on Saturdays (27th July), fresh from shooting the band's new music video earlier in the week.

"Can't believe one of my big sisters is getting married tomorrow! Such a special day," Mollie tweeted on Friday last week, before adding the next day: "OMG she's married!! Party over hurrrr. #KingThurman.

"Blonde Power! #KingSisters #Bridesmaids," Mollie later added long side one of her snaps of the happy occasion.

Last week The Saturdays shot the music video for their new single 'Disco Love', which will follow 'What About Us' and 'Gentleman' as their next release.

The Saturdays are due to return in autumn this year with their new studio album.

Just Can't Get Enough
The Saturdays
Download on iTunes