The Saturdays' Frankie Sandford Confirms She Is Expecting A Baby Boy

The 'What About Us' singer says she and her fiance are expecting a "little dude" later this year.

The Saturdays star Frankie Sandford has confirmed the sex of her unborn baby after bandmate Mollie King seemingly let it slip earlier this week.

The 'All Fired Up' star revealed in an interview with Hello this week that Frankie and her fiancé Wayne Bridge are expecting a baby boy, which Frankie herself has now confirmed.

"Having so much fun getting my little Dude's clothes together!" Frankie tweeted last night (8th July), to confirm the news. "A little boy to add to the…"

Alongside the message Frankie also shared a snap of some baby clothes she has bought or been given ahead of the birth.

Check out the picture Frankie tweeted of her new baby clothes below (Credit: Instagram): 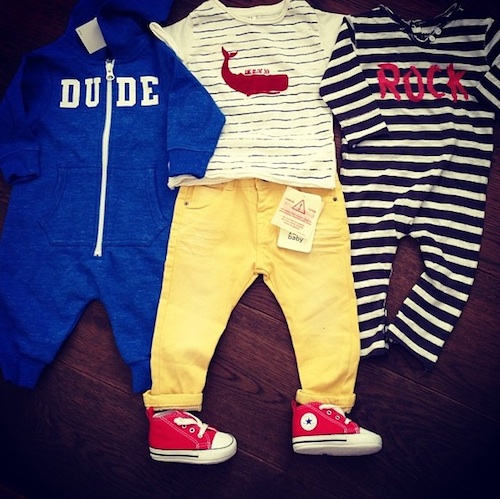 The 'Gentleman' singer appeared alongside her bandmates on stage in Hyde Park this past weekend, showing off her baby bump to the thousands in attendance.

Frankie Sandford announced her pregnancy earlier this year and is believed to be around six months pregnant, while she and Wayne Bridge got engaged at the start of the year.

The girl band star's bandmates Rochelle Wiseman and Una Healy are already mums, having both had baby girls within the last two years.