The 'All Fired Up' singer makes the slip-up during her DJ debut in London this weekend.

The blonde-haired star was making her DJ debut in East London where she spoke to Hello magazine.

"We're all very excited and can't wait to meet him," she reportedly told the publication. "It will be nice to have a little boy around."

Frankie was also seen on stage with the rest of her group in Hyde Park over the weekend and announced her pregnancy shortly after her engagement.

Check out a picture of the girls on stage in London together below: 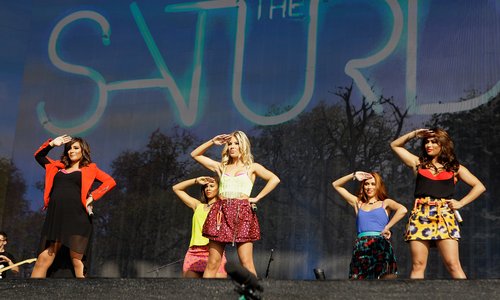 Meanwhile, Rochelle and husband Marvin Humes recently welcomed their first child together and Una Healy already has a girl with husband Ben Foden.

The Saturdays are currently preparing for the unveiling of their new album with new single 'Gentleman' out now.